The Navier-Stokes equations, written in conservative vector form, are

I always liked to use this form of the Navier-Stokes equations. I think it is simple and convenient. But, today I realized that it could easily lead to trouble, specifically when interpreting the convective term. For example, if one needs to expand the convective term things could easily get confusing. The reason is that the convective term, as written here, is known as a diadic – when two vectors are stacked next to each other $\mathbf{u}\rho \mathbf{u}$.  The divergence of a diadic is given by
\begin{equation}
\nabla\cdot\mathbf{A}\mathbf{B} = \mathbf{A}\cdot\nabla\mathbf{B} + \mathbf{A}\nabla\cdot\mathbf{B}
\end{equation}
But this may be confusing for the convection term since you can easily lose track of what A and B are. Here’s how I do it – but first let me remind you of a few things:

To resolve this last issue, I use the following mixed tensor-vector notation

I use this form whenever I want to derive the weak form of the momentum equations to avoid using diadics. When all is said and done, I switch back to the vector form for convenience.

Cite as: Tony Saad, “A Note on the Vector Form of the Navier-Stokes Equations,” in Dr. Saad’s Notes, retrieved on April 15, 2015, http://www.tonysaad.net/notes/a-note-on-the-vector-form-of-the-navier-stokes-equations/. 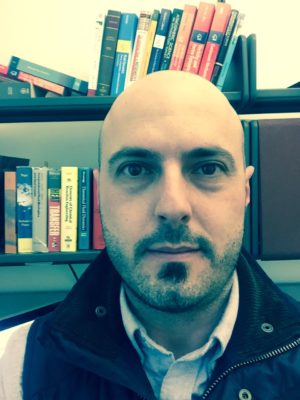 Hello. My name is Tony Saad. I am an assistant professor of Chemical Engineering at the University of Utah. I love math, fluid mechanics, scientific computing, and programming. I am also a recent father to a young boy. I hope you will find my musings on this site useful. Cheers and thanks for stopping by!